Hi everyone, it’s num. In the last devlog we estimated that Nusakana will be ready for release around the end of September, but oh boy, how wrong we are. The game proved to be even more larger than we thought it is originally will be. During an internal beta test we did, the playthrough almost clocked to 30 hours, and that is with all the knowledge of the game beforehand, no blind run. With that experience on hand, we estimated roughly that the regular gameplay will take probably around 30 – 50 hours. During the test, we also discover a lot more bugs that is pretty major and could hamper the gameplay. But rest assured, all of those are now in the past, we have completed the the beta testing! Although, it mean that the game need to be delayed further… But it’s for greater good, we swear!

With the game now confirmed to be playable and actually clearable, we are moving on to the polishing phase, adding missing features, functionalities, and preparing the game to be released on Steam. One of the major functionalities we add is xbox360 gamepad (x-input) compatibility. By default, the engine we are using doesn’t support x-input, so if you want to play the game using xbox gamepad (which is pretty much standard for gamepad on PC gaming nowadays), well, it will be pretty messy since the control is not configured properly and there is no way to change the gamepad key input. But thanks to Gamepad Extender script from Lone Wolf and the edit from wltr3565. You can now use xbox360 gamepad when playing Nusakana properly! Not only that you can also change the gamepad key input if you wish so! Isn’t it pretty neat? 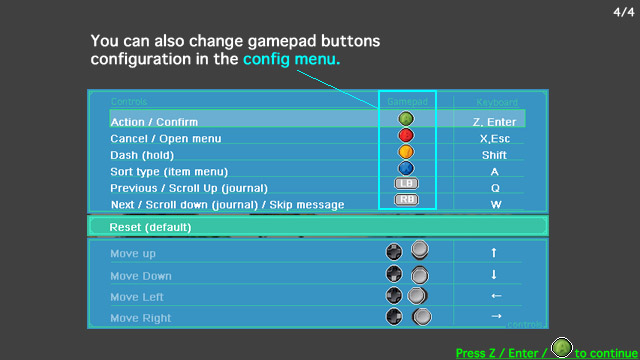 The xbox360 gamepad compatibilities is one of the many functionalities we are going to add and polish further. Hopefully everything goes well, and we can release Nusakana… Well, I don’t dare to actually estimate when it will be released, since the last time we estimate… It’s going off chart and delayed. But for sure, we will release it before this year end, that’s my promise! See you in the next devlog, and thank you for reading!