(Disclaimer: All of the themes showcased are works in progress)
Hello, Fledglings! Jasmine here with another music update for Ciel.

State of the OST

Right now, I am working on finalizing music for our demo. All of the final pieces have been sketched, and minus a few edits, are going through their final comb-over. This includes the battle themes, which this post is about! 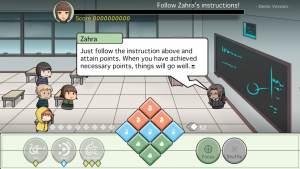 The cool thing about Ciel is the fact that you get to accompany her from her adolescent years to her adult years, including watching her grow academically, physically, and characteristically. These traits tie into the game as different types of battles: Quiz, Score, and Fight.

It didn’t take long for me to realize that each type of fight needed it’s own score – each battle contains a different focus for battle success. Fight battles would obviously be more unruly while quiz battles would most certainly contain a more focused tint. Score battles are heavily timed, so the sense of urgency was a must. Want to stay true to the use of leitmotif’s, I decided to use what I’ll coin the Week Theme (music played when the player and Ciel are going to classes/events on the Ark) as the thematic material for battle themes. 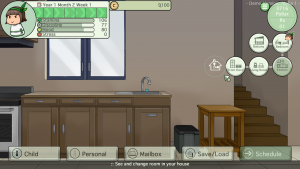 Early in development, I had decided to take Alfi’s love for Futurepop and incorporate it into the soundtrack somehow. Low and behold, a catalyst, or muse, for the Fight Battle theme:

It’s cute, bouncy and upbeat. It sounds like a 10 year old Ciel, right? I went further, wanting to take the art of sampling and use it for this purpose. I decided to repurpose the week theme and Futurepop-ify it:

For quiz battles, I wanted to focus on test taking. Working diligently through a mental obstacle to achieve a goal since, essentially, quiz battles require the player to meet or achieve special requirements.
My first reference came from none other than Akiko Yano:

This studious theme instantly struck me as the perfect reference for the quiz theme. It was bouncy, quick, but held enough empty space, in my opinion, to let thoughts pass through. Imagining music as a picture is a thing I do, haha.
I was able to hit a useable idea on the first try, surprisingly!

Lastly we have the score battle! My thoughts were fast, racing time. The first thought, oddly enough, was:

Weird idea, but I wanted something with a driving motion. Take on me had the right feel, but felt a tad slow. It wasn’t urgent enough. So, I decided to incorporate the intensity of racing time with a slight pep in its step.

That’s all for now! Keep an eye out for the demo release and I hope you look forward to hearing from me again.